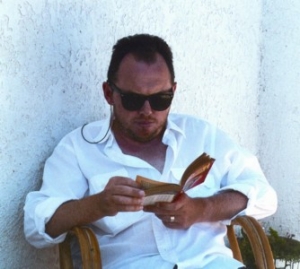 This recording was made on 22 August 2005, at Lee Harwood's flat in Brighton.

"Kelvin Corcoran is a writer for whom politics and poetics are inseparable; his work demonstrates an exhilarating truth, that wit and irony need not exclude passion and trust in the pursuit of poetry." -- Ken Edwards THE NEW BRITISH POETRY

"Kelvin Corcoran examines with a powerful microscope the public and private world we inhabit, and the language we sue there and which uses us.  His poems - dense, intense, filled with sharp fast thought - expose the horror, '‘the swinish morality' of this world ... The outrage is only lightened by the small acts and visions of tenderness in our lives.  His vivid poetry shocks us into thought by its sheer intelligence." -- Lee Harwood on TCL

"The 'straight music' of the English lyrical tradition drives these poems that are honed, hard, elegant and economic.  Then, suddenly, brilliance flashes out against the grain, in the flaws. It is 'the ripped voice makes us free'."-- Rosmarie Waldrop on LYRIC LYRIC

"The poet's news comes so swift and sharp and fresh that it really is immediate, present; not loud. The magic of it, Cheltenham delivering, morning intelligence not subscribed to the delusions of higher paranoia, spooks and eavesdroppers. A world where you can still hope to 'slice a tomato and smell it', before some clown goes on television to fudge the plural vision."-- Iain Sinclair on MELANIE'S BOOK

"There is a clear sad music playing right through this book of answers, steady and unmistakable. Against it, the urges of friendship, love and harsh judgements move sharp and bright with their own turbulences. ... If Corcoran takes himself into a timeless Greece it's not with the intention of fooling himself: he's an honest visitor to the oracle."--Roy Fisher on WHEN SUZY WAS

"Kelvin Corcoran has allied a strikingly individual intelligence to a genuinely musical sensibility."--Don Paterson, The Observer.

"Despite the denatured surface, much of Corcoran's poetry is extremely emotional, and the accumulation of evidence of the outside world just involves us more firmly in his emotions about politics, love and family tragedy. What we may be seeing is a fundamental renewal of rhetoric - answering to a new generation with new expectations of artistic syntax, genre rules, and connectedness."-- Andrew Duncan, THE FAILURE OF CONSERVATISM IN MODERN BRTISH POETRY

"Corcoran emerged into view around 1985, with the piquantly entitled Robin Hood in the Dark Ages, and has produced consistently ever since - something which is true of no other individual. It is this strength and calm which have made him a giant figure of the middle generation..."--Andrew Duncan, Poetry Salzburg.

"Kelvin Corcoran's new book ... Largely responds to time spent in Greece. His sense of wonderment at the geographical location of so much myth and literature takes the form of a meditation on presence - in a manner that is both intellectually and emotionally probing. His concern for presence at times recalls a high modernist ambition to reflect culture as a whole. More often though, it takes the form of poignant glimpses of his own emotional life with his family. It is his easy movement between these two that makes this book so engaging."--Devin Johnston, Chicago Review.

"Corcoran is so skilled with his line and subject matter, he can help us wake up through his writing: he sweeps from the ancient to the contemporary and back again, often in the same short stanza. ...His work is linguistically complex yet, emotionally, socially, politically and, above all, poetically (musically) alive."-- Andy Brown, Stride Magazine.

"Much of Corcoran's later work explores the possibility of being saved; this of course, is a reworking of the idea of elegy, as if he is standing in the same place, but looking firmly in the opposite direction. ...Corcoran's austere, 1980s style embodied the politics of the left under siege - it was full of anxiety and anger. The more recent works... change the focus without losing conviction. They celebrate the possibility of utopia..."-- Charles Bainbridge, The Guardian.

"Kelvin Corcoran's recent work inhabits the imagination as a distinct sphere of abundance, drawn from reality as a celebration of the true scope of the mind. And the instrument of this is a written eloquence which takes in the past of poetry and of the spirit as a freshly lived condition, which the self occupies at its most impassioned and most sincere. So it cannot be easy, or singular, though it is full of direct statements, simplicities and particular events."--Peter Riley, PN Review