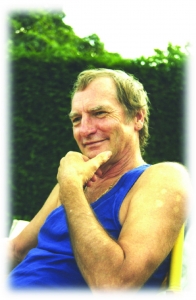 Tim Fletcher first realised something about himself when he discovered, amongst other things, a simple system clarinet under the sheets. He practised in this way because this newly discovered relic, that he had acquired from a junk shop after listening to bands of Fats Waller, was a secret, a secret because Tim had managed to surreptitiously collect (steal) the money for it. Anyway, Tim next flirted with a tenor sax, then because he only got three O levels, he joined a military band. Whilst he loved strutting about in front of the girls in multicoloured uniforms he realised after seven years that he couldn’t stand military music nor it him. On leaving the band he graduated at Christ Church College Canterbury and acquired a distunction in English. Then he was idiot enough to enter into teaching which to his amazement he loved, probably in the same way that he relished the idea of mild flagellation. Tim lives with his wife Jan in the charming village of Pulborough next to the South Downs and a beautiful nature reserve which feeds the skies with a huge abundance of geese, swans, cormorants, ducks, banana finches, pendulum tits, sarongs, silky stockings, frilly girdles, diaphanous knickers and tarty shoes all of which Tim finds distressing, distasteful and decidedly delicious. Oh yes, Tim has also at times assumed the lordly title of Brett -- probably found in some Hemmingway book. In Anglo Saxon Brett of course means leader king or so Tim imagines. Tim became Brett because of the levelling of the 'poor tired Tim' ditty when he has always been a magical powerhouse of energetic dynamism, and also when he was little he hated being called Timmy. Timmy -- what did they think he was -- some kind of dinky pussy. You may wonder at the somewhat regal expression Tim is wearing in the above portrait. This is because from out of the dark and hideous depths of paranoia he has catapulted himself into extravagant self-delirium and calls himself Tim again. The above is the officious biography of Tim Fletcher which he conceded to agree to under much pressure pushin’ down on him and which he wrote himself. A lot of it could be somewhat ... true ... yes indeed... Oh, nearly forgot to mention that Tim Fletcher is the long standing editor of First Offense, a magazine of contemporary poetry....He also dreams incessantly of being a prince of poetry and makes quirky CDs.