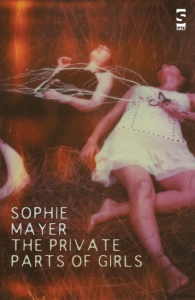 Sophie Mayer teaches at King's College, London and the Bishopsgate Institute. The Private Parts of Girls, her second collection, is published by Salt in May 2011. In 2009, she published Her Various Scalpels and The Cinema of Sally Potter: A Politics of Love. Her work appears in the anthologies Infinite Difference: Other Poetries by UK Women Poets (ed. Carrie Etter, Shearsman, 2009) and The Allotment: The New Lyric (ed. Andy Brown, Stride, 2006), and in magazines in the UK, US and Canada and online, including blackbox manifold, Great Works, Masthead, nthposition, Under the Radar, and West Coast Line.

She is a Commissioning Editor at Europe's only LGBTQ arts magazine, Chroma (whose 2010 Utopia issue she guest edited) and a Contributing Editor at Hand + Star; she also writes regularly for Horizon Review, Sight & Sound and Second Run DVD. She has published essays on poetics in Masthead, SubStance, Studies in Canadian Literature and Stress Fractures (ed. Tom Chivers, Penned in the Margins, 2010), with an essay combining her critical interests in contemporary poetry and film forthcoming in Peter Robinson’s Oxford Handbook of Contemporary British and Irish Poetry.

This sequence appeared in Her Various Scalpels and is an attempt to think about commodity culture and the trade routes of staples: latex, tea and chocolate. They were prompted by magazine articles about the US government's search for artificial rubber during WWII (Late/x), the founding of the British Museum with plantation wealth (Theobroma), and an exhibition on the Silk Road (Cha). I'm fascinated by the idea of mapping the relationship between the exchange of goods transnationally and the exchanges between these products and our bodies: a series of invasions, evacuations, and appropriations.

This sequence appears in The Private Parts of Girls. It is an ongoing project that I'm hoping will grow into a chapbook: a science fiction 'novel' in fragments, a postmodern/postapocalyptic pulp response to Gertrude Stein's Tender Buttons::Objects Food Rooms.

As a station. A promotion. Scatterstar your epaulettes. Billets temporary: nine month orbit or generation ship. Applications open to all who wear wings: waxing cyclically, not Icarene. Requirements: to carry oneself aboard oneself; in such gravidity, flow monitors at zero.

Not radiation but nucleation: to divide oneself infinitively. To be plural as stars are; slower than light, condensing at the core. To revel in consequence, even at the event horizon: pulsing at the rim, all systems humming towards the brilliant parameters of night.

'The non-sequiteurs arrest you by their very strangeness, then draw you into a sensory chain where they seem just… true. Brilliantly disconcerting.' - Luke Kennard, Poetry London

'Full of zest, variety and intellectual ambition. There is no such thing as a typical Mayer poem, diversity being her great strength. Dazzling.' - Jane Holland, Poetry Review