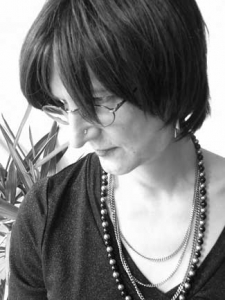 There's not much to tell. I grew up in Egham, Surrey, did a Comp. Lit. degree in Norwich with a year abroad in Bonn, and tried disastrously to be a teacher, before ending up in Stuttgart with a job as a translator in a law firm. I've lived in Berlin's Bohemian Village for the past ten years or so, working as a freelance translator, writing, doing the occasional reading and co-organising Berlin’s festival of poetry in English, Poetry Hearings, as well as translating some of the many German poets living in the city.

When I was ten I wanted to be an archaeologist. I never realised that ambition, but archaeology is nonetheless a rich seam of metaphor; the accumulated resonances of language part of the process of creating meaning from discarded scraps and apparently meaningless jargon.

There are also quite a few translations of contemporary German poets scattered around in various magazines and journals such as the Chicago Review, the Atlanta Review, LIT, Shearsman and Tears in the Fence, as well as here http://www.no-mans-land.org/ and here http://www.leafepress.com/litter1/huchel/huchel01.html

My poem 'temporary lodging' was the Oxford Brookes Poetry Centre Poem of the Week in November 2010 and my translation of a poem by Norbert Hummelt, 'exit', in February 2011.

"Hales' finely tuned ear and sense of form give structure to poems which deploy cast-off chunks of language and casually, continuously subvert the reader's expectations. ... [c]ut with the sure hand of a surgeon ... The best poems ... are all the more successful for what they risk, and finally achieve: fresh language which expresses the chaos of life in the 21st century, but does not sacrifice human warmth and the sure intelligence of tradition." (Stephan Delbos on hazard or fall in 'Grasp')

"... the working method is a deliberate disruption of a single, linear reading of history and the world. Boo to grand narratives. Hooray for the fragment. At the very least the poems draw attention to how the past is part of the present – not in the sense of it having made us, but of us making it." (Alistair Noon on a bestiary of so[nne][r]ts in 'Sand')